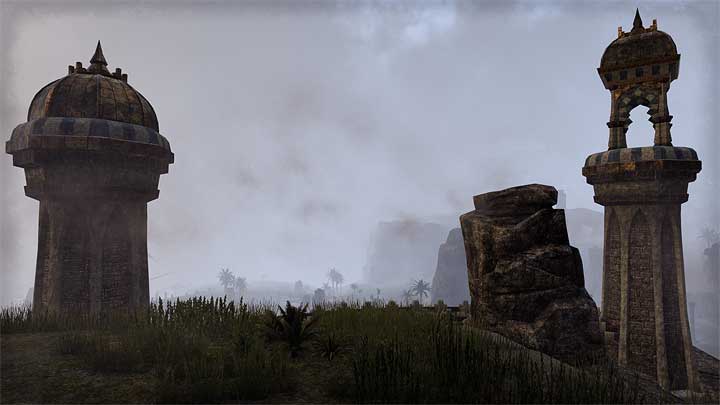 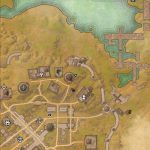 Auridion, Skywatch: Cimalire (48:42)
The area is crawling with guards and witnesses. But multiple times during her perambulations, the victim will sit on the ground, leaning on the bench across from a drinker and his passed out friend. Just enough space behind the bench to get her, but watch for the guard who comes to stop by the light post to your right. 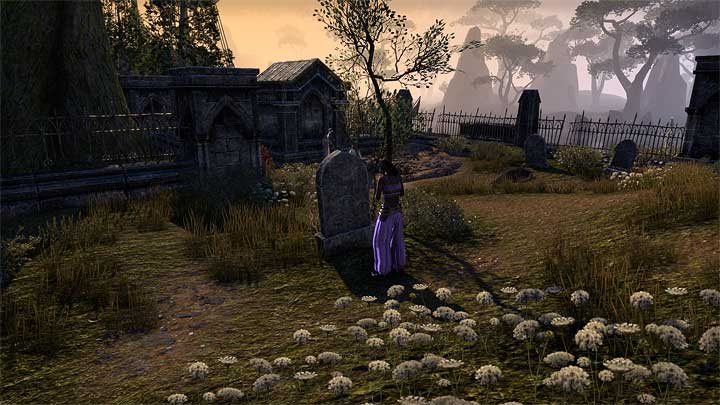 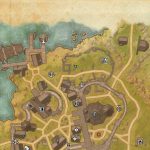 Bangkorai, Evermore: Berea (56,27)
This Redguard with dreads, dressed in an attractive light purple top and pants, incautiously stops to mourn some lost soul at a tombstone. There are couple other citizens in the area doing the same, but they quickly turn their backs, absorbed in their own pieties. R.I.P. 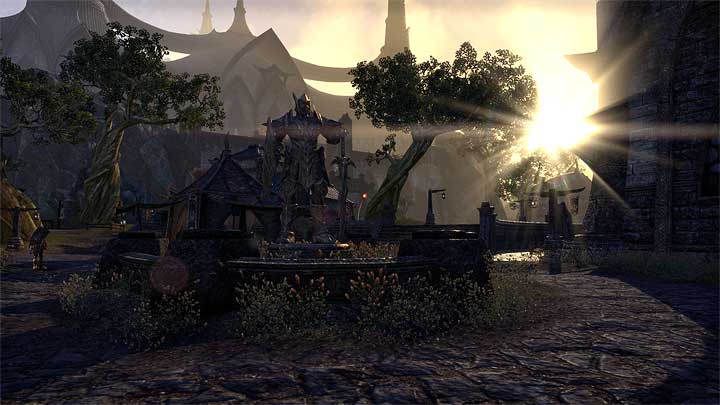 Deshaan, Mournhold: Cindiri Malas (45:50)
Easily found and done away with around the statue of the warrior at 45:50 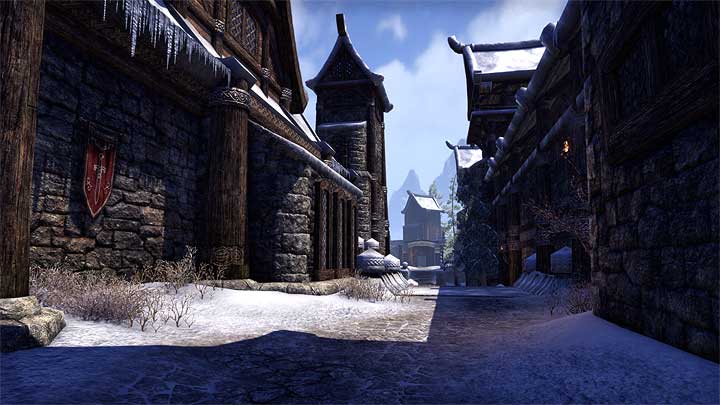 Eastmarch, Windhelm: Hakida (33:62)
No one here but other assassins. Easy kill behind the Fighters Guild at 33:62 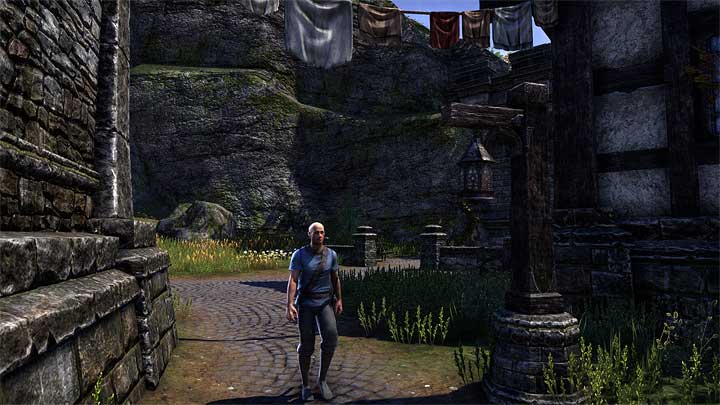 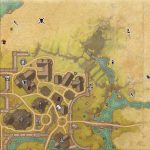 Glenumbra, Daggerfall: Cesarel Hedier (65:24)
In the north east corner of the city, you can catch him all alone under the clothesline between two residences at 65:26. His spawn point is close to here, so if someone gets him elsewhere, you’ll get your chance quickly. 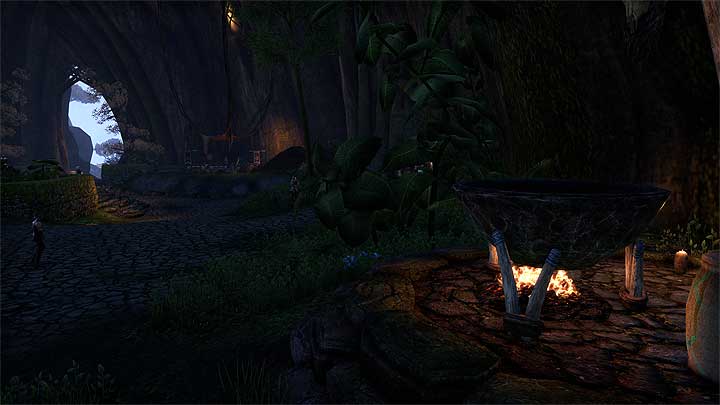 Grahtwood, Elden Root: Dirdelas (26:62)
This fellow likes drinking, music, fishing, admiring horses, and practicing his archery skills. You may be able to catch him fishing back of the stables, but safer is to wait for him to come inside the Great Tree and sit down to warm his hands at 26:62. 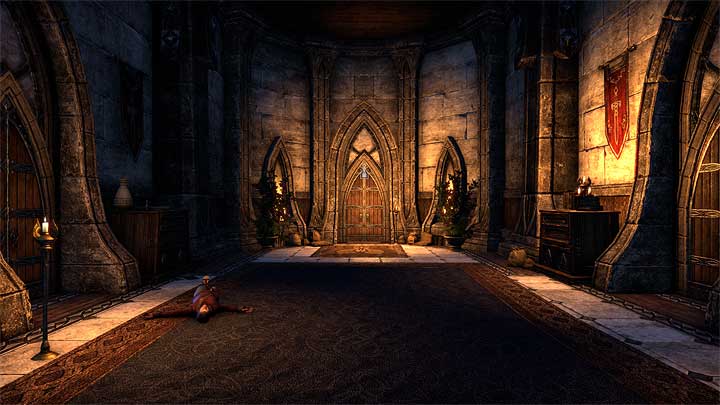 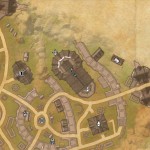 Greenshade, Marbruk: Caraleth (69:34)
This tattooed redhead is a tricky one. She’s never reliably alone. So this calls for a double murder. Wait for her to enter the Fighters Guild at 69:34. Then kill the one potential witness, Iniel Laftrius, who often walks toward the Fighters Guild door. He is easy to get. With him eliminated, you can safely take Caraleth as she tries to leave. But careful, there is a guard inside the guild hall who once in a great while glances toward the front door before turning his attention elsewhere. 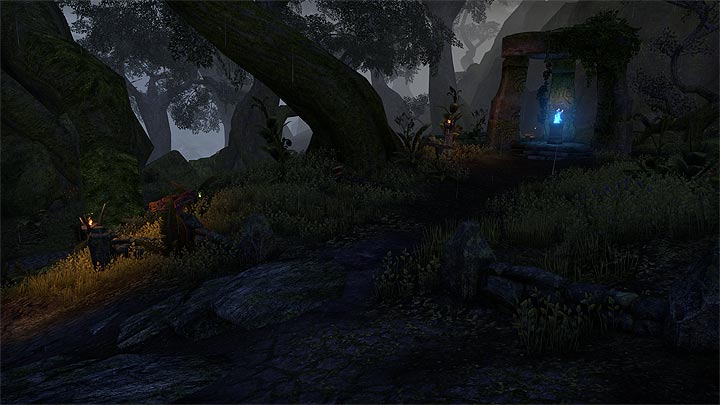 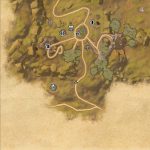 Malabal Tor, Vulkwasten: Sihada (53:79)
The Litany of Blood seems to have it in for the Salt of the Earth. This humble Khajiit in a white dress sweeps the village pathways down toward the Wayshrine. Felt a twinge of conscience killing her so easily. 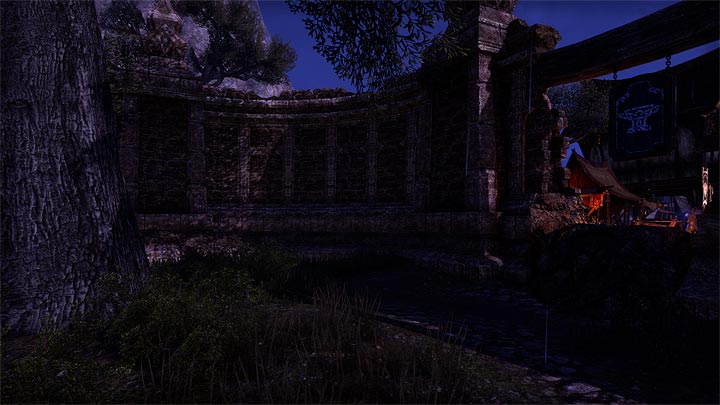 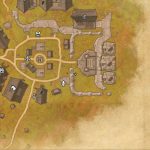 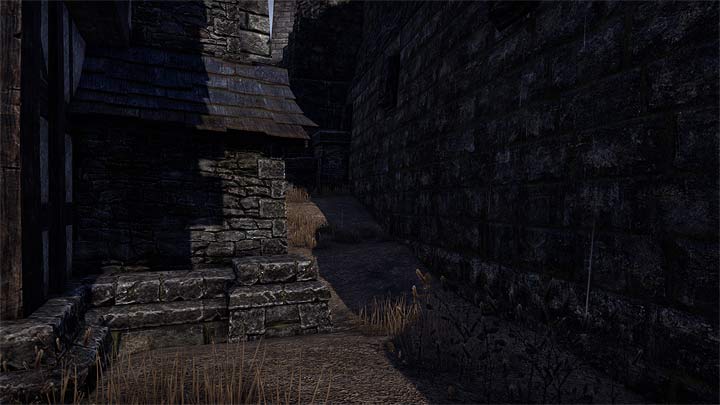 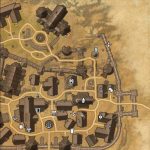 Rivenspire, Shornhelm: Bolaag (66:47)
This one juggles knives in the marketplace. She’s quite good at it. But she seems to have other, more lucrative interests as well. You can take her round back of the bank, when she goes there, presumably to case the joint. 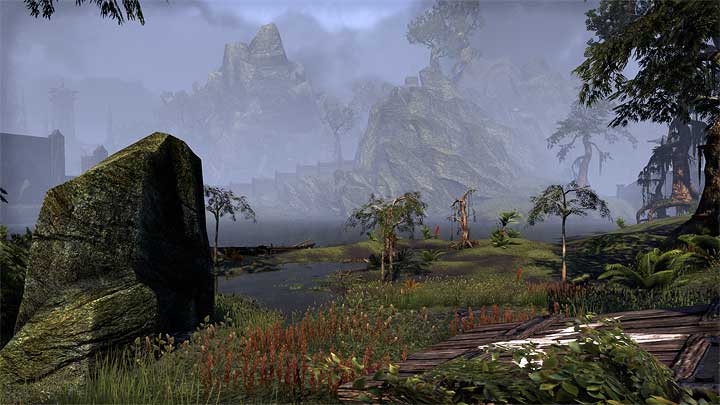 Shadowfen, Stormhold: Gideelar (62:17)
Watch for a lizard with a rake who has “no time for talk.” She foolishly decides to tend the landscaping right by the Outlaw Refuge entrance at 62:17. Nice view but not exactly safe. 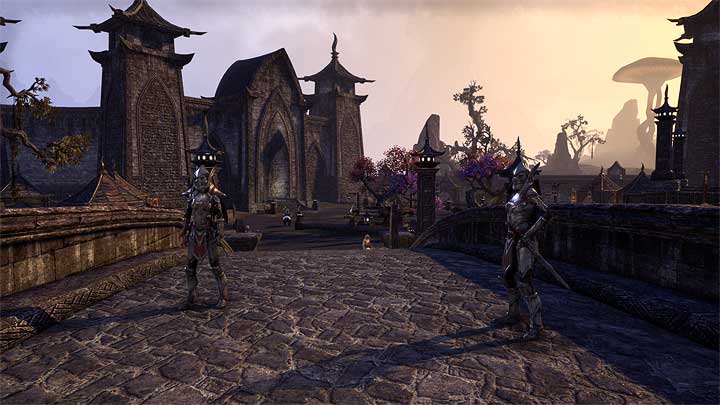 Stonefalls, Davon’s Watch: Dinor Girano (58:58)
Wait on bridge with two guards at 58:58. Your victim roams a lot so you may have to wait a good while, but he’s an easy kill here at either foot of the bridge. And waiting beats running all over the place looking and perhaps finding him at less opportune locations with witnesses. 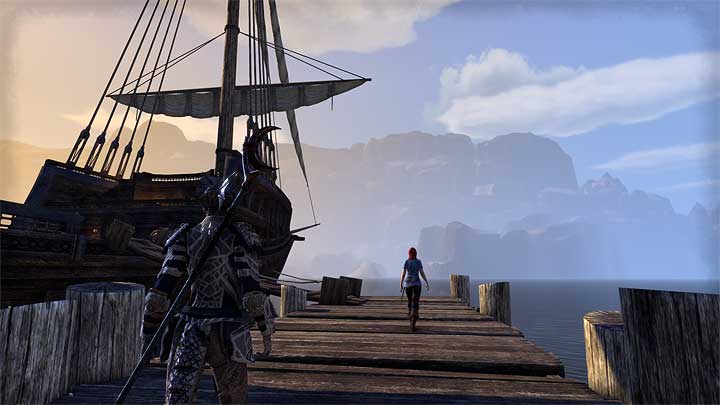 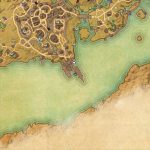 Stormhaven, Wayrest: Alix Edette (62:68)
A weepy, redhead beggar with a blade, wandering the docks. “Please, I was once like you.” Then she knows what’s coming. No shortage of places to take her, but easiest and safest is when she walks to the end of the pier. The scenic view will get you every time. 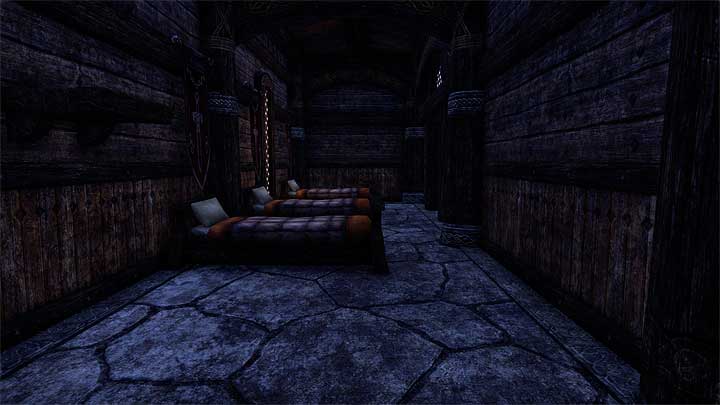 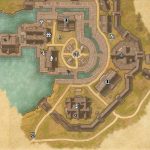 The Rift, Riften: Eldfyr (58:85)
Prepare your crime scene. The art of safe, successful assassination at times requires dispatching potential witnesses before your target arrives. This one hauls wood and practices arms inside the Fighters Guild. Wait for him to arrive; then kill Carodus Atius praying in the corridor dormitory. Beware the guard who walks this corridor, first one way, then the other.  With that, the field is clear to take Eldfyr without a cry or a whisper when he comes around. 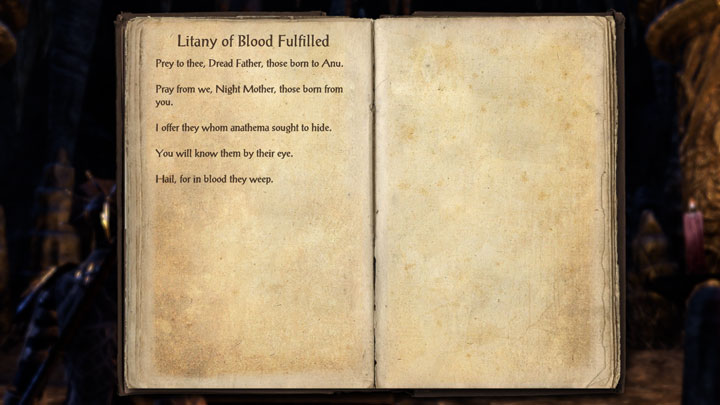 Statue of the Night Mother
Return to the Dark Brotherhood Sanctuary to worship, glory in the bloody display of your victims, and receive your Cadaverous Assassin polymorph reward. Note that this reward binds to your account, so you only need perform the Litany of Blood once if you are insufficiently pious and only interested in looking skeletal. The Achievement points, on the other hand, only go to those of your avatars that actually perform the rite.

Shadowy Supplier
The primary benefit for low level, starting avatars is to get the passive Shadowy Supplier at Rank 4. Rank 4 is very easy to attain and will give you a steady supply of the Sithis’ Touch set. You can pick up one a day at the Dark Brotherhood Sanctuary in the Gold Coast or at the Outlaw Refuge in any region. While far from the best set, it will always provide a solid base to fill the holes in any other regional set you may be working. No need to expend any other points in the skill, unless you want to specialize in murder and mayhem. Four items will give you two Health and a Weapon Critical and Spell Critical boost. No need to equip a fifth item, which provides a special boost for using the Blade of Woe, unless, again, you are intent upon a career of murder and mayhem. Taking advantage of the Shadowy Supplier means that early on you can enjoy the benefits of equipping two full or nearly full armor/weapon/jewelry sets and all the boost that delivers.

Note: Now that we have Jewelrycrafting, the Shadowy Supplier also provides a steady stream of rings and necklaces to “deconstruct,” free for the asking, though as a once-upon-a-time “Deconstructionist,” I cringe at the misappropriation of that term.

Blade of Woe
The other major benefit to joining the Dark Brotherhood for low level, starting avatars is the Blade of Woe itself, the primary “X key” weapon of the Dark Brotherhood. You get it immediately after the qualifying quest to kill some innocent the hard way. Blade of Woe will simplify a great many of the stealthy puzzle quests of Elder Scrolls Online, where you must reach objectives without raising alarm among the locals. This is especially true of Thieves Guild quests, where it will prevent you from tearing out a great deal of hair in frustration. Though sacrificing 75% of the XP credit on kills, Blade of Woe will let you stealthily eliminate pesky citizens who are just getting in your way with their prying eyes and cries for help. Well worth having in your toolkit. And it does not even cost you a skill point.

The Blade of Woe also simplifies and makes safer the repeatable Thieves Guild pickpocket quests. Instead of running around with perhaps a little bounty on your head looking for a string of victims, choose one safe, easy mark to work. Each citizen is good for three pickpockets, though at increasing odds of detection. Go as far as you want to risk, then assassinate the citizen. Upon respawn, he or she will have full pockets, again, and your odds of success will be reset.

Essential Addons: ESOLocate (Out-of-Date but works) or Map Coordinates
Don’t think about it. Get one of these addons. If for no other reason, it will let you use the guide above to find Litany of Blood target locations by coordinates, without running around for scenes that match images or descriptions. ESOLocate provides your own coordinates all the time, wherever you drag the display on screen. Map Coordinates provides them at the bottom of the main map, keyed to your cursor on the map so you can easily set a destination. (MiniMap by Fyrakin provided coordinates usefully on a minimap display. But it has not been maintained and now throws errors and fails to load.)